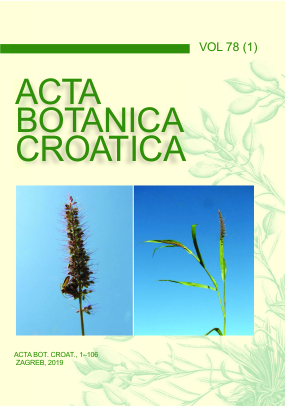 Climatic gradients can be used to predict the extent to which climate drives biodiversity and to which biodiversity may be affected by global climate changes. Climate and evolutionary history are linked by the ecological adaptations of species and the history of Earth’s climate. If so, phylogenetic diversity may be a good metric to estimate biodiversity. We aimed to test whether the phylogenetic diversity of Macedonian dry grasslands was related to climatic variables. We sampled 575 plots, identifying the species and building a phylogenetic tree for them. We calculated two metrics of phylogenetic diversity and regressed them against climatic variables. We also tested whether there were nodes in the tree responsible for the main observed spatial patterns of phylogenetic diversity. We found a strong signature of evolutionary history in species sorting across a gradient driven by climate in Macedonian dry grasslands. First, the amount of evolutionary history decreased towards drier and more seasonal climates, suggesting a phylogenetic niche conservatism. Second, there was an air temperature filter
and a temperature seasonality filter, acting in opposite directions and leading to phylogenetic clustering. Third, there were few nodes in the phylogenetic tree with high degrees of allopatry, associated with clades that differed not only in their geographic distribution, but also in their climatic preferences. Macedonian dry grassland communities developed over centuries of traditional land use but are threatened nowadays by human activities.
The use of phylogenetic approaches may lead to more effective conservation policies and help us preserve this highly diverse vegetation.