Genetic variability and distance between Lactuca serriola L. populations from Sweden and Slovenia assessed by SSR and AFLP markers 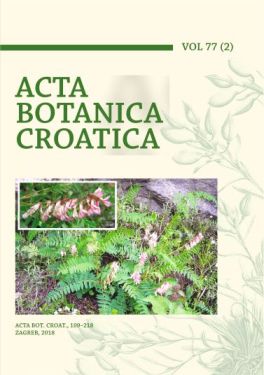 The study involved 121 samples of the common weed, Lactuca serriola L. (prickly lettuce), representing 53 populations from Sweden and Slovenia. The seed materials, originating from different habitats, were regenerated
and taxonomically validated at the Department of Botany, Palacký University in Olomouc, Czech Republic. The morphological characterizations of the collected plant materials classified all 121 samples as L. serriola f. serriola; one sample was heterogeneous, and also present was L. serriola f. integrifolia. Differences in the amount and distribution of the genetic variations between the two regions were analyzed using 257 amplified
fragment length polymorphism (AFLP) and 7 microsatellite (SSRs) markers. Bayesian clustering and Neighbor-Network were used for visualization of the differences among the samples by country. Under the Bayesian approach, the best partitioning (according to the most frequent signals) was resolved into three groups. While the absence of an admixture or low admixture was detected in the Slovenian samples, and the majority of the Swedish samples, a significant admixture was detected in the profiles of five Swedish samples collected near Malmo, which bore unique morphological features of their rosette leaves. The Neighbor-Network analysis divided the samples into 6 groups, each consisting of samples coming from a particular country. Reflection of morphology and eco-geographical conditions in genetic variation are also discussed.